Masks are optional for those participating in Sunday worship services, Children's Ministry programs, and other ministries at church. 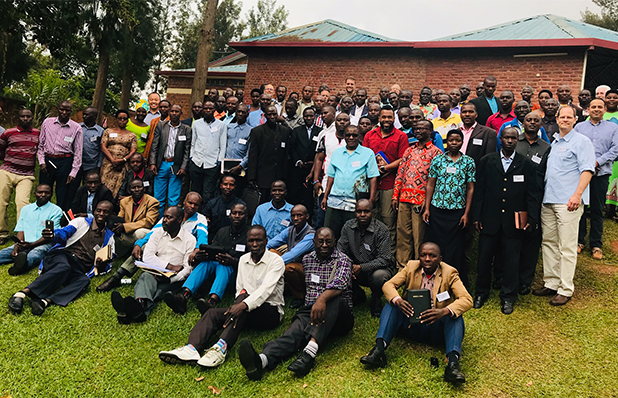 In October, I was blessed with the opportunity to go on a discipleship trip to Rwanda with a group of 10 brothers in Christ in partnership with ALARM (African Leadership and Reconciliation Ministries). We came from five different churches, representing three different denominations and four ethnic groups. For 12 days, we served—but we also received so much from the people He placed around us.

The common question people asked when I returned was, “How was Rwanda?” And I’ve been quick to point out to everyone that God wrecked me. If you’re interested in learning more about what that means, please read on.

On April 6, 1994, Rwanda experienced the start of a horrific genocide in which more than a million people were killed in 100 days. This is not the largest number of people killed in the history of genocides in the world, but it certainly was the quickest. How can a foreigner even wrap their heads and hearts around this uncountable number and the unspeakable ways in which so many died? I had the opportunity to process this when our team visited a church genocide memorial.

The memorial was on a large Catholic church ground, which housed the church, a school and residence houses for the priests and nuns. From the moment the tour started at the gate of the church, I knew that I would never be the same again. 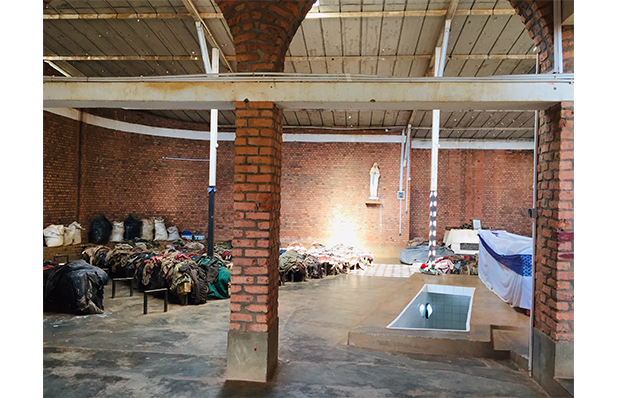 We walked past the iron gates to the main doors that had been blown open by grenades. The clothes of the victims remain stacked up on wooden pews—you can still see and smell the stench of dried blood and feel the bullet holes in the walls and ceiling. Imagine the horrors of the women and children who were slaughtered inside this church (in total, 11,000 people died on this campus).

A distinct feeling of nausea came over me inside the church. I literally wanted to throw up. I’m a visual learner, so even though I had read about the 1994 genocide, it was on a whole other level to be physically standing in and seeing one of the places that bears testimony to the evil that was done.

Behind the church, the memorial developers constructed a mass burial site, which now houses the remains of more than 45,000 people. (Rwandans are still finding bones in fields today, and many bring those remains here.)

We were allowed to walk into one of the burial sites, where we saw rows and rows of caskets on five levels of shelves and two sides. A few caskets were left slightly open, and we could see they were filled to the brim with piles and piles of bones.

Again, the only word I could use to describe my heart was wrecked. After the tour guide left us, I sat on the curb of the church grounds with all sorts of questions: “Where was God when this happened?” “What would I have done if I were on this campus facing down a mob with machetes and guns charging?” “Am I capable of killing my neighbors because they weren’t in the same ‘tribe’ as me?”

And then God brought to mind Isaiah 64:6: “All of us have become like one who is unclean, and all our righteous acts are like filthy rags; we all shrivel up like a leaf, and like the wind our sins sweep us away.”

The sins of these perpetrators of genocide were horrific and unspeakable. I have never killed anyone. But Jesus made it clear in His Sermon on the Mount that the commandment to not take someone’s life was extended to not just the physical act of violence but also the internal attitude of anger that would prompt such an action (Matthew 5:21-22). We all agree that murder is wrong, but not many of us realize that the thoughts that germinate in our hearts—anger, despising, dehumanizing—are just as wrong as taking a machete to another person.

In fact, if I were to place my sins on a line graph and compare the sins of the perpetrators to mine, there would be a millimeter difference (maybe—I’m probably being too generous here) compared to the eternally perfect, holy and righteous God. Jesus died for the sins of the world (1 Peter 3:18). He died for the machete-wielding, hate-mongering, tribe-decimating perpetrators of the genocide. He also died for the wretch that is me.

At the church, one of my team leaders had a video camera and asked if I wanted to share my thoughts on camera. “No way,” I said. “I feel like throwing up.” I didn’t want to talk to anyone, much less try to figure out what to say on camera. 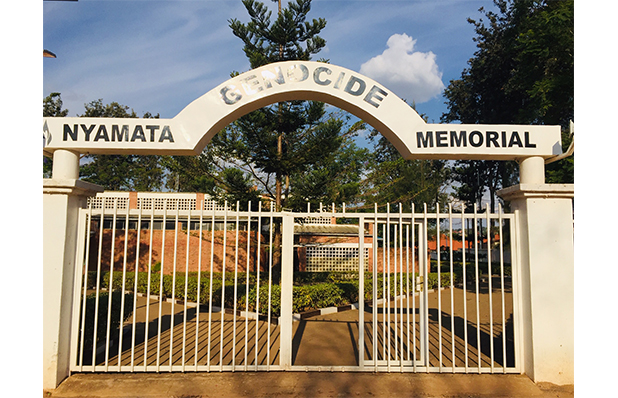 I stepped outside the church compound to take a picture of their sign.

Shortly after, I noticed something started to wrap around my left leg. I looked down and discovered it was a little boy, maybe 3 or 4 years old, who was hugging my leg. I knelt down to give him the biggest hug I could. I wanted to hold him longer, but from the corner of my eye, I could see his mom waiting (plus I didn’t want to seem creepy.) As they walked off, I just stared at this boy. I didn’t even reach for my phone to take a picture because I knew I had to soak in this blessing and the message God was giving me through this angel: “I’m here for you, Ben. I was here for these people in the church. I never left.”

My heart was wrecked in a much needed way. I thought I had a good understanding of what sin was, but now I see it even clearer, though certainly still not perfectly. I believe that most Christians have a sanitized view of sin: “My sin is not that bad. I’m not that bad.” We can come to believe that Jesus’s offer of salvation is a good thing but not the greatest and the ultimate thing we all need personally.

We lose sight of (or perhaps we never truly knew) how serious our condition is (we were all DEAD! [Ephesians 2:1–3]) and how desperate our need for salvation is (we are made ALIVE in Christ! [Ephesians 2:4–10]). Is it any wonder why living missionally is so hard for so many when we have such a limited view of God’s grace through His Son?

May we all be wrecked for His glory and our good.

Alternative Ways to Meet as the Church

Praying for Your Heart and Mine

Saying It … or Praying It?

They Had Me at the First Song

What Did They Say?

Worship with us at